Alabama Law Welcomes the Class of 2025 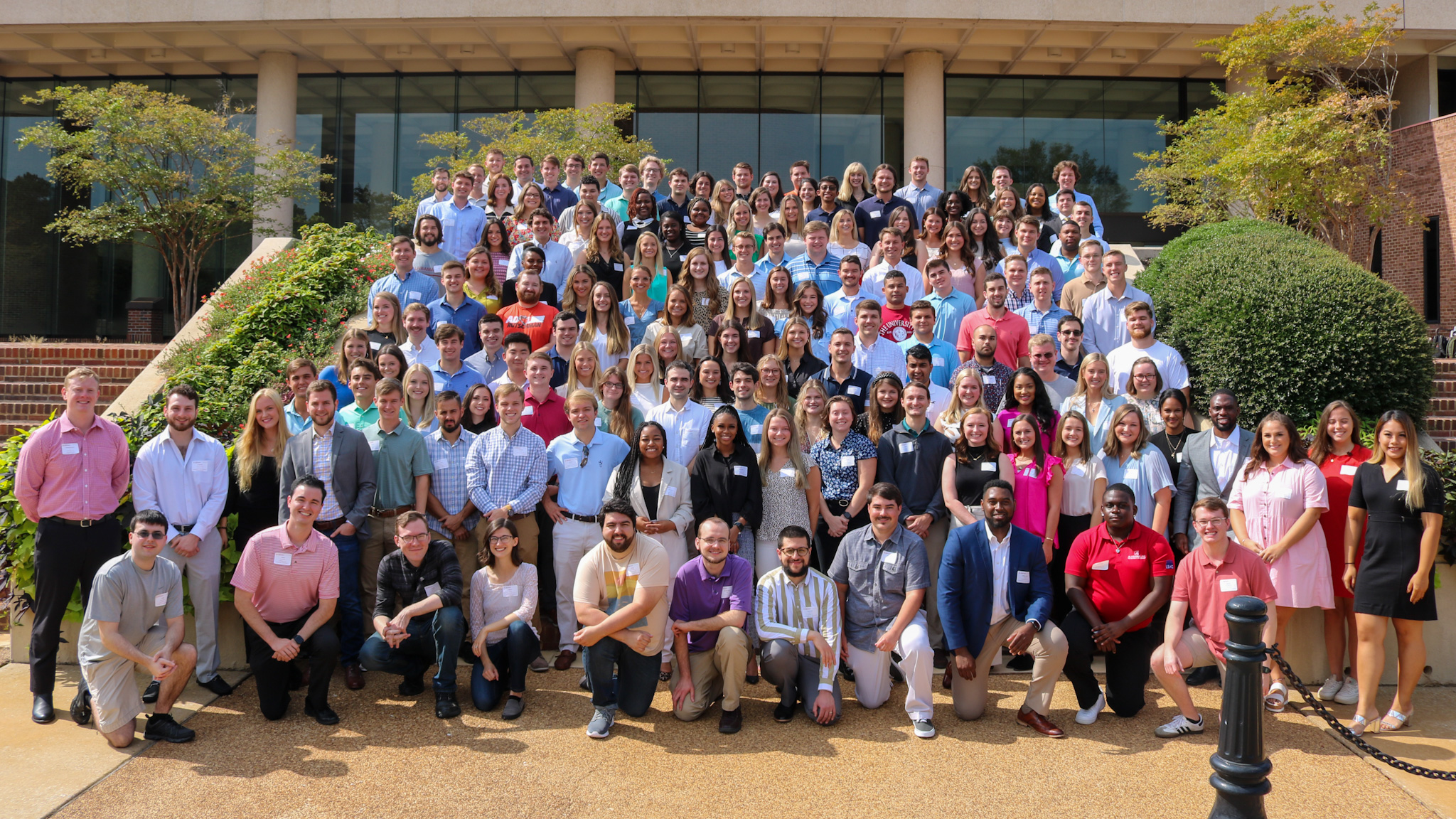 As a new school year begins, Alabama Law is proud to welcome the Class of 2025. This year’s new incoming group consists of 149 students—drawn from a competitive pool of over 1,700 applicants. Read more about the new 1L Class online. 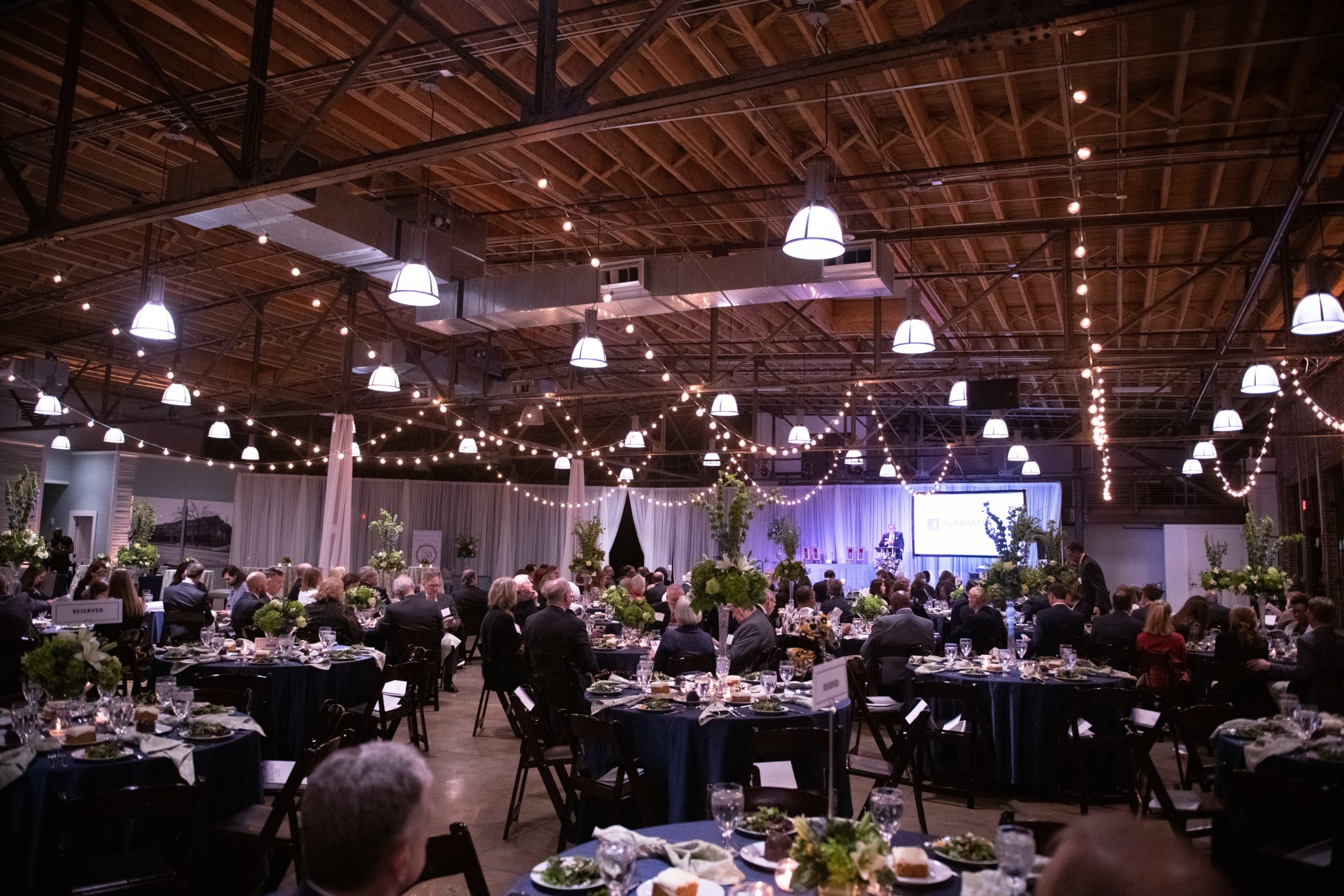 Nominations for the Sam W. Pipes Distinguished Alumnus Award, Alabama Lawyer Hall of Honor, and the Alabama Rising Young Attorney Award are open until September 1. Learn about each award and submit a nomination here. 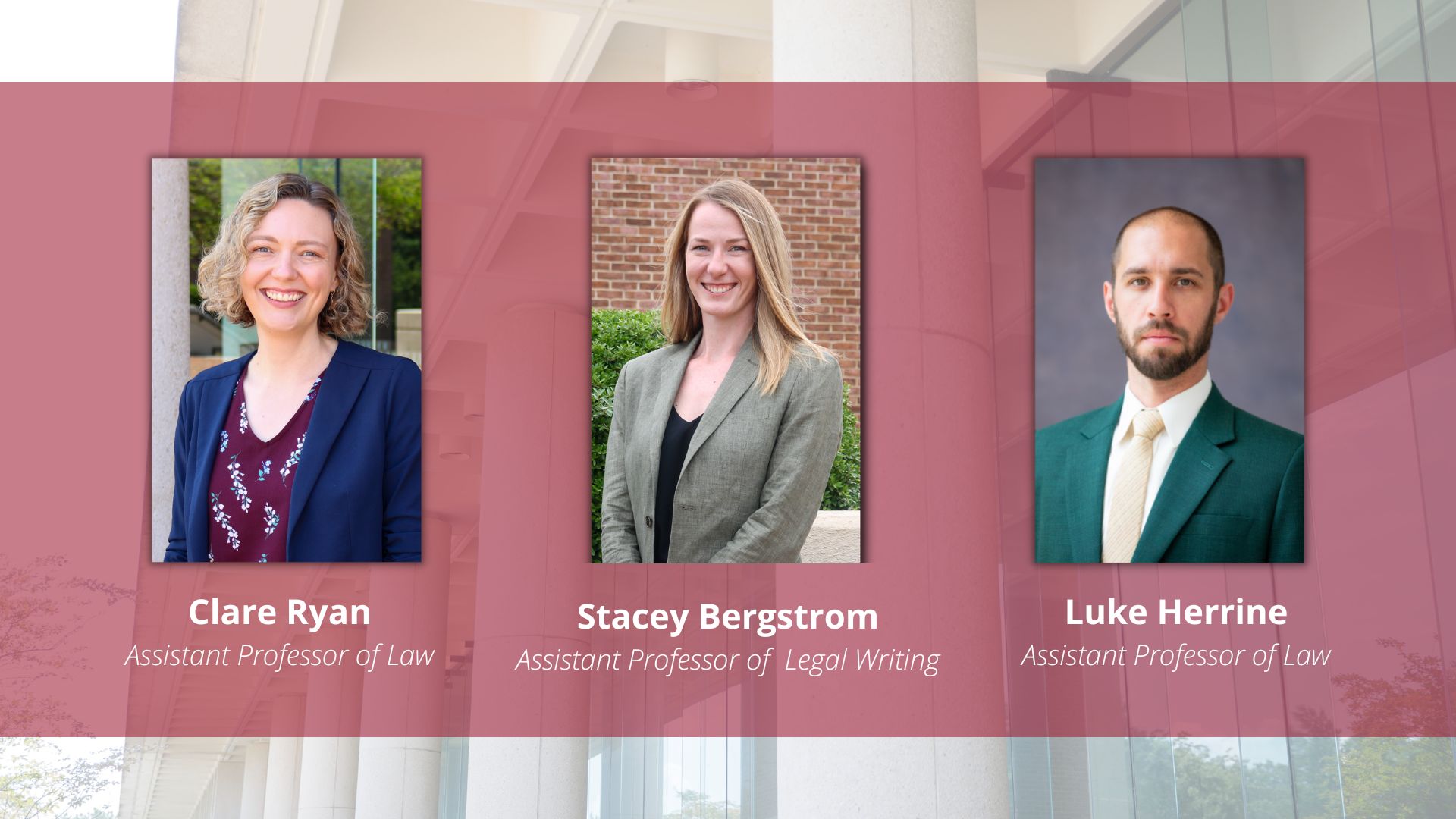 Professors Clare Ryan, Luke Herrine, and Stacey Bergstrom have joined the faculty at Alabama Law this year. Learn about their education, areas of expertise, and backgrounds here. 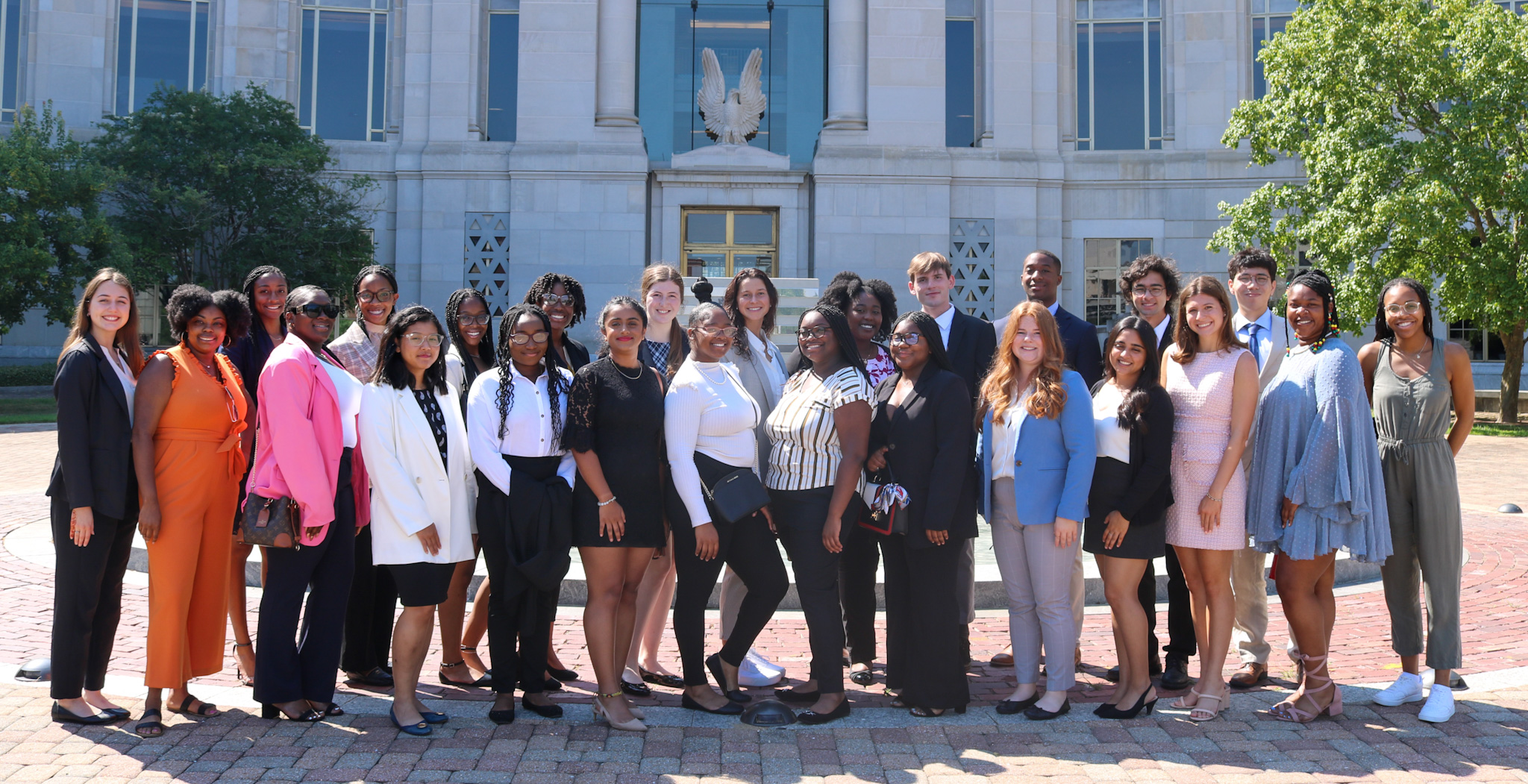 This year, the University of Alabama School of Law hosted its first-ever Summer Scholars program—a unique opportunity that introduces the study of law to students who come from backgrounds that have historically been underrepresented within the legal profession. Made possible through the generous support of the University of Alabama System’s McMahon-Pleiad Prize, the Alabama Civil Justice Foundation, and Derrick (’03) and Tamesha Mills, 25 undergraduate students from universities and colleges across Alabama and surrounding states participated in the four-week program. Learn more about this year’s Summer Scholars experience. 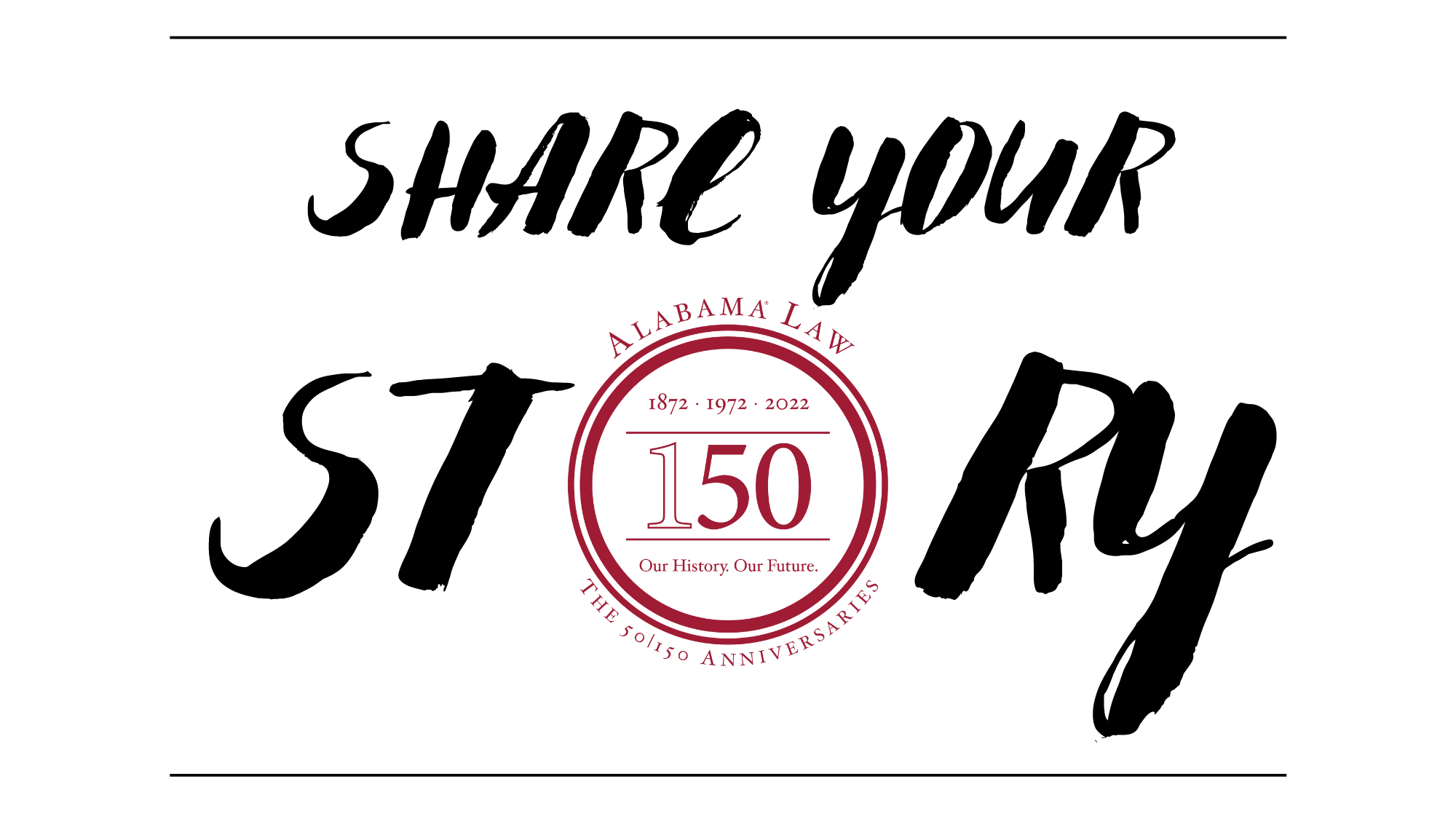 Throughout the 2022-2023 academic year, Alabama Law is commemorating The 50|150 Anniversaries. During this time of remembrance, we are celebrating the 150th Anniversary of the founding of the School of Law and acknowledging that it was just 50 years ago that the first class of African American students graduated from the Law School.

As a part of these anniversaries, we want to hear your stories. If you’d like to share your experiences, please submit your written remembrances, videos, or photos that highlight your time at Alabama Law, the meaningful relationships you developed with other students and faculty, or how your education at Alabama Law has contributed to your career. What’s your story?

Akiesha N. Anderson (’17) has been named the new chief of staff for the Alabama House Democratic Caucus.

Adam Bourne (’04) was recently elected vice president of the Alabama League of Municipalities.

Brannon Buck (’97) is now serving as president-elect of the Alabama State Bar.

Bradley R. Byrne (’80) was named president and CEO of the Mobile Chamber of Commerce.

Mark A. Crosswhite (’87) was appointed to the board of directors at Regions Financial Corp. and its subsidiary, Regions Bank. He also was recently named to Birmingham Business Journal’s Power 60 list of Birmingham’s most influential executives for 2022.

Jane Kimbrough Dishuck (’47) was inducted into the 2020 class of the Alabama Lawyers’ Hall of Fame.

William Burton Hairston, Jr. (’50) was inducted into the 2020 class of the Alabama Lawyers’ Hall of Fame.

Edward “Ted” M. Holt (’01) was named to Oakworth Capital Bank’s board of directors.

Katharyn I. Christian McGee (’08) was promoted to special counsel at Duane Morris LLP in Philadelphia, PA.

Alan B. Miller (’03) was named president and CEO of The American Village in Montevallo, AL.

Daniel K. Odrezin (’12) was elected to the Mountain Brook Board of Education.

Michael Onderdonk (’67) was inducted into the 2022 Alabama Senior Citizens Hall of Fame.

Meighan C. Parker (’18) joined the University of Chicago Law School as a Harry A. Bigelow Teaching Fellow, Lecturer in Law.

Dagnal Rowe (’72) was elected chairman of the Alabama Securities Commission.

Arthur L. Smith, III (’05) was elected president of the Council of Superior Court Judges of Georgia.

Harold Stephens (’80) was honored with the President’s Award by the Alabama State Bar Association.

Cecil Howard Strawbridge (’31) was inducted into the 2020 class of the Alabama Lawyers’ Hall of Fame.

Ashley Tidwell (’19) was appointed as the District 3 Director of the Alabama Defense Lawyers Association Board of Directors.

The Crum Family Charitable Foundation contributed $10,000 to the Crum Family Endowed Lecture Series for Law and Business. The gift was facilitated by Laura L. Crum (‘82).

The Alabama Chapter of The Order of the Coif contributed $12,000 for student scholarships.

Professor John Felipe Acevedo published an article, Law’s Gaze, in volume 25 of The Journal of Gender, Race and Justice.  In July he presented his paper, Crime Fantasies, Panics, and Witch-Hunts in American Society at the Law & Society Association Annual Meeting. At the meeting he also served as a reader in an Author Meets Reader session for Claire Priest’s book, Credit Nation, and chaired two panels, Contested Property and The Implications of Gender, Race, and Culture in the Regulation of Property. He will continue as Coordinator of the Socio-Legal Approaches to Property Collaborative Research Network.

In August he was quoted in articles by the Associated Press and USA Today on debunking false information regarding the re-implementation of Alabama’s criminal abortion statute. In addition, he spoke with reporters from other newspapers to assist in their fact-checking on the topics of criminal abortion statutes and the regulation of alcohol and sexual speech.

Professor Shalini Bhargava Ray published an opinion analysis for two Supreme Court cases on SCOTUSblog and participated in an episode of the podcast SCOTUStalk regarding several key immigration cases from last term. She taught a class on Legislation & Regulation in the Summer Scholars program, presented a draft paper at the Administrative Law New Scholarship Roundtable at the University of Minnesota, and served as the discussant for a virtual panel at the annual Law & Society Association conference. She also recently published an essay in Lawfare, based on her article in the Indiana Law Journal, about the president’s duty to set immigration enforcement priorities.

Professor Russell Gold published articles Power Over Procedure, in volume 57 of the Wake Forest Law Review, and Volunteer Prosecutors, in volume 59 of the American Criminal Law Review. Additionally, Professor Gold gave a presentation at CrimFest at Cardozo Law School in New York regarding a future article on the role of budget scarcity in facilitating prosecutor accountability.

Assistant Dean Anita Kay Head recently presented at the Association of Legal Writing Directors’ Innovative Teaching Conference at Georgetown University Law Center. Her presentation, Breaking it Down: Teaching Students How to Approach Long-Term Assignments, provided strategies for teaching students to manage the discrete tasks embedded in a writing project, improving both their work-life balance and their efficiency.

Professor Paul Horwitz’s review of the collection, Law and Religion in the Liberal State, was published in the Journal of Church and State.

On August 2, Professor Ron Krotoszynski, Jr. became the President of the Southeastern Association of Law Schools (SEALS). He previously served as Vice-President of SEALS. While at the SEALS annual meeting, which took place from July 27 to August 2, in Destin, Florida, he moderated a panel of Associate Deans for Faculty Research, participated in a round-table discussion group on “Reproductive Rights Post-Dobbs,” and helped lead a discussion of the law review submission process under Scholastica. Krotoszynski presented The United Kingdom: Free Speech as a Socio-Legal Norm, at the Privacy Scholars Discussion Forum, which took place June 20-22, at the University of Stockholm School of Law, in Stockholm, Sweden. This paper is a chapter in his forthcoming book: Free Speech as Social Structure: A Comparative Analysis of How Courts and Culture—Not Constitutional Text—Shape the Freedom of Speech (forthcoming Oxford University Press 2023). He also presented an earlier draft of this paper at faculty workshops in March, in the United Kingdom, at the University of Oxford School of Law (Corpus Christi College), the University of Edinburgh School of Law, the University of Leeds School of Law, and the University of Reading School of Law. On May 15-18, Krotozynski participated as an elected member of the American Law Institute (ALI) at the ALI’s annual meeting in Washington, D.C. He also currently serves on the ALI’s members consultative group for the Restatement of Torts–Privacy. On May 10, Krotoszynski presented South Africa: Reconciling the Freedom of Speech with Equality, Dignity and Human Freedom in the Long Shadow of Apartheid, another chapter associated with his book project, at the University of Cape Town School of Law, in Cape Town, South Africa. On May 12, he presented the draft chapter at the South African Institute for Advanced Constitutional Law, Public, Human Rights, and International Law (SAIFAC). SAIFAC is associated with the University of Johannesburg. On June 9, Krotoszynski presented Common Law Constitutionalism and the Protean First Amendment, the U.S. chapter of his book project, at the National Public Service University, in Budapest, Hungary, as part of a faculty workshop hosted by its Information Society Project. Finally, on June 7, he workshopped his South Africa book chapter (noted above) at the Free Expression Scholars Forum, also held at the National Public Service University.