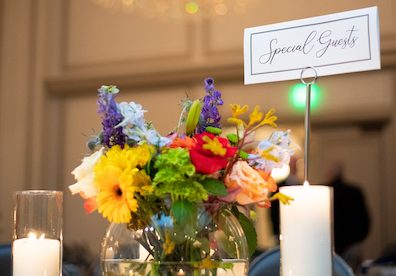 Sign up to join us virtually on February 26 for our annual Alabama Law Alumni Society Banquet. A reception will begin at 6 p.m. CT, with the award ceremony to follow 7 p.m. CT. Two new awards —the Alabama Law Hall of Honor and the Rising Young Attorney Award—will be presented at this year’s ceremony alongside the annual Sam W. Pipes Distinguished Alumnus Award.

The Sam W. Pipes Award is the highest honor bestowed by the School of Law, and it is given to an outstanding alumnus or alumna who has distinguished himself or herself through service to the Bar, The University of Alabama, and the School of Law.  This year, the Managing Committee of the Board of Governors of the Law School Foundation is proud to announce Mr. Frank M. Bainbridge as the 2021 Sam W. Pipes Distinguished Alumnus Award Winner.

Sign up to join us in honoring Mr. Bainbridge at the virtual Alabama Law Alumni Society Banquet.

Walker Percy Badham III took his J.D. from the University of Alabama School of Law and is a founding partner of Badham & Buck in Birmingham, Alabama.  He has practiced law for more than 33 years, focusing on complex litigation, business disputes, insurance coverage, class actions, and personal injury litigation. Throughout his career, he has served as President of Alabama Young Lawyers, Director of the Trial Academy for the Tort Trial and Insurance Practice Section (TIPS) of the American Bar Association, and has consistently been listed in Best Lawyers and Super Lawyers.

Sign up to join us in honoring Mr. Badham at the virtual Alabama Law Alumni Society Banquet.

Bryan K. Fair took his J.D. from UCLA and is the Thomas E. Skinner Professor for The University of Alabama School of Law. Fair has served as Director of Diversity, Director of International Programs, Associate Dean for Special Programs, Coach of Moot Court Teams and Faculty Advisor to numerous student organizations throughout the Law School. Throughout his career, Fair has been a tireless advocate for the recruitment and retention of minority students. He is also the author of Notes of a Racial Caste Baby: Color Blindness and the End of Affirmative Action (NYU Press, 1997) and has served as an Assistant Vice President for Academic Affairs at the University of Alabama for several years.

Sign up to join us in honoring Mr. Fair at the virtual Alabama Law Alumni Society Banquet.

Julia Smeds Roth took her J.D. from the University of Alabama School of Law, and she is a partner with Eyster, Key, Tubb, Roth, Middleton & Adams, LLP, in Decatur, Alabama.  Her practice includes matters of family law, wills and estate planning, and litigation. Roth served as Chair of the Client Security Task Force of the Alabama State Bar, President of the Morgan County Bar Association, special counsel to the Judiciary Committee of the Alabama House of Representatives, and is a member of the prestigious Alabama Law Institute—having served on the Executive Committee for the Institute. Roth is also serving of the Law School’s Capital Campaign Committee, is a member of the Law School Patrons, and is a past President of the Law School Foundation’s Board of Governors.

Sign up to join us in honoring Ms. Roth at the virtual Alabama Law Alumni Society Banquet.

The Rising Young Attorney Award is a new honor that recognizes a recent graduate who has shown significant leadership and purposeful service to the legal profession, their community, and the School of Law. In this inaugural year, The Leadership Council of the Alabama Law Alumni Society is proud to honor Ms. Sharonda Childs Fancher as the 2021 Rising Young Attorney Award Winner.

Sharonda Childs Fancher took her J.D. from The University of Alabama School of Law, and she is an associate with Baker Donelson where she has built a thriving legal practice advising clients on a variety of employment matters. Previously, she served as a law clerk to the Honorable Inge P. Johnson, Senior United States District Judge for the Northern District of Alabama. Fancher has been listed among the Best Lawyers in America “Ones to Watch,” was named the Leukemia & Lymphoma Society’s 2015 Birmingham Woman of the Year, and has provided pro bono legal assistance to the United States Conference of Mayors and other organizations seeking to add the ERA as the 28th Amendment to the U.S. Constitution.

Sign up to join us in honoring Ms. Fancher at the virtual Alabama Law Alumni Society Banquet.