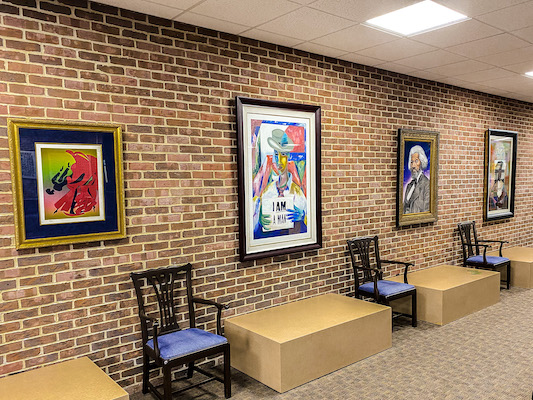 Emily Bibb, Curator and Collections Manager of the Paul R. Jones Collection of American Art at The University of Alabama, explained, “Part of the reconciliation came with an apology from the University and an honoring of Jones and what he had done throughout his life. In his commencement speech, he told the University to do better in the future and spoke about forgiveness without bitterness. In extending his forgiveness he offered us this amazing gift so the art can be seen and used into perpetuity.”

At the start of the new year, Alabama Law received 10 pieces on loan from the Paul R. Jones Collection to display in the Law Center building. Reflecting on the works at the Law School, Dean Mark Brandon said, “We are grateful for the opportunity to display these powerful pieces of art.  The images are moving testaments to the Black experience in America.  Mr. Jones’s life, in turn, is a testament to the extraordinary power of healing.  As we reflect on the images that now grace our building, I hope that each of us feels a spark of inspiration to emulate Mr. Jones’ generosity of spirit and his call to “do better.”

A few highlights of the display at the Law School include a portrait of Harriet Tubman by Amos ‘Ashanti’ Johnson that has never before been exhibited; “Meditations on Manhood I and II” by Fahamu Pecou, an African American artist and scholar who combines observations on hip-hop, fine art, and popular culture to address how contemporary representations of Black men influence people’s perceptions of Black masculinity; and “Faith, Hope, Love: A Tribute to the Wisdom of the African American Woman” by Roederick Vines.

Josh Porter, Director of Diversity and Inclusion and Assistant Professor of Law in Residence observed, “This is a great moment to recognize Jones’ work and the good he has done. His story offers an opportunity to reflect on how far we have come while also reminding us that there is still much work to be done as we seek to ensure that people from all communities are treated fairly and truly represented in a meaningful way.”

Learn more about the Paul R. Jones collection on the museum’s website.