March 25th marked the 90-year anniversary of the arrest of nine black teenagers who were unjustly convicted for the rape of two white women on a train near Scottsboro, Alabama. In memoriam of this landmark case, several student organizations from the University of Alabama School of Law hosted a week of events beginning on March 23rd.

Blacks & Jews on Trial at Scottsboro

The first event was a virtual panel entitled “The Scottsboro Boys Shall Not Die: Blacks & Jews on Trial at Scottsboro” and was co-hosted by the Black Law Students’ Association (BLSA), the Jewish Law Students’ Association (JLSA), and the Student Bar Association (SBA). Speakers Denise Lynn, John Miller, and Andrew Baer paneled to discuss the ways both anti-black and anti-Semitic racism against their lawyers shaped the case of the Scottsboro nine. Connecting the experiences of the Scottsboro teens and their lawyers with the ongoing challenges minorities in the U.S. face today, the panel discussed the need for revolutionary police and government reform to overcome the systems of racism that remain in place.

Two days later, on the actual anniversary of the Scottsboro Nine’s arrest, BLSA and the Office of Diversity and Inclusion at The University of Alabama School of Law hosted Curtis Flowers, a man who was wrongfully imprisoned for 23 years, and his attorney, Rob McDuff, to speak about Flowers’ imprisonment. After being tried an unprecedented six times, Flowers was falsely convicted of the murder of four people in the 1996 Winona, Mississippi Tardy Furniture Store shootings despite a lack of evidence—not to mention the numerous character testimonies and eyewitness statements offered in his defense.

In 2019, after several of his trials had been overturned due to insufficient evidence and racially biased jury tampering, a podcast called In the Dark discovered and brought national attention to Flowers’ case. In response, Mississippi Attorney General Lynn Fitch agreed to rehear the case, and on December 16, 2019, Flowers was released. Flowers received the maximum $500,000 in wrongful imprisonment pay from the state—though that payment is equivalent to less than half of the time Flowers served under the $50,000 per year Mississippi standard. Flowers and McDuff both feel justice was not served, and Flowers shared he looks forward to building a positive future as he continues speaking out against injustice in the legal system with the hope of preventing his experience from happening to anyone else.

To wrap up the week, BLSA hosted its annual scholarship banquet on March 25th. This year’s banquet theme was The Butterfly Effect: The Ripple in The Tide For Change, and BLSA used this theme to highlight those at the law school pushing to make a difference such as professors Bryan K. Fair and Anil Mujumdar. Professor Mujumdar was not only recognized at the event but he was also presented with the Gail K. Johnson Outstanding Attorney Award. This is an accolade voted on by the BLSA sponsors that is given to an attorney who has worked to improve the lives of minorities in the state of Alabama. Six BLSA members were the recipients of the organization’s student scholarships, 1Ls Ronnie Braxton, Amani Moore, and Layne Lightfoot, 2Ls Tiyonna Griggs and Natalie Daniel, and 3L Sheena Allen. The event was brought to a close with the announcement of the BLSA executive board for this upcoming year which includes president Brenita Softley, vice presidents Natalie Daniel and Amani Moore, secretary Tiyona Griggs, treasurer Trey Edwards, historian Raine Cook, parliamentarian Courtney Garret, community service chair Jaleel Washington, and diversity chair Hunter Jackson. Layne Lightfoot and Kyra Perkins were also recognized for their service on the scholarship and fundraising committee. 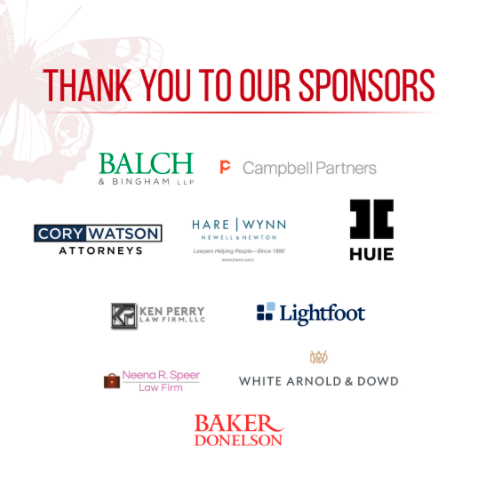