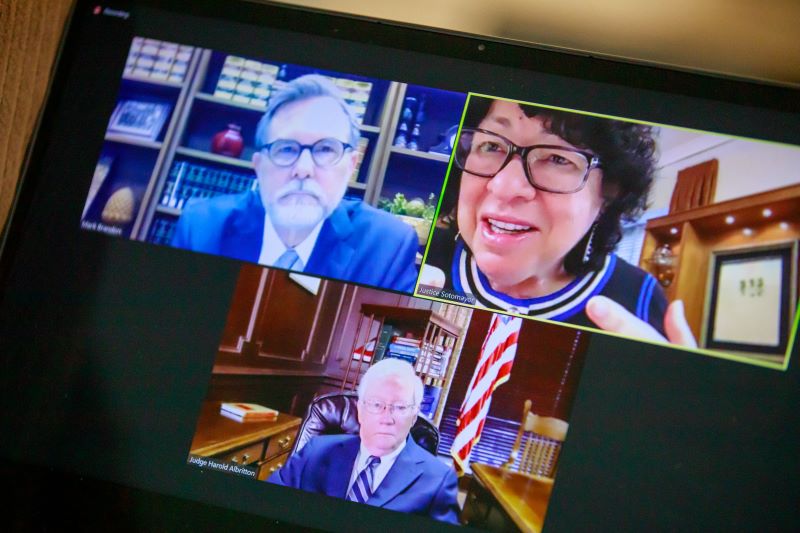 The University of Alabama School of Law hosted Sonia Sotomayor, Associate Justice of the Supreme Court of the United States, for the Albritton Lecture on Nov. 10.  The Lecture, held virtually, was moderated by W. Harold Albritton, Senior District Judge of the U.S. District Court for the Middle District of Alabama, and Mark Brandon, Dean and Thomas E. McMillan Professor of Law.

In the question-and-answer format event, Justice Sotomayor spoke to students, faculty and invited guests on a wide range of topics from collegiality on the Court and its public image to advice for current law students.

“I really do believe that the law can help society, and I hope all of you will maintain that in your work and in your ambitions in what you do as lawyers,” she challenged the students in attendance.  “Will you take pride in being a lawyer? Will you do it with a sense of pride and honor and decency and commitment to working as hard as you can to protect your clients and advise the people who depend on you? That’s what I expect. That’s what I hope.”

“It was an honor to welcome Justice Sotomayor to the School of Law.  The fact that this year’s lecture was held virtually didn’t dampen excitement within the Law School community,” said Brandon. “The Justice’s talk was informative, insightful, engaged, and even joyful,” he added.

Wading into the question of public perception of the Court, Justice Sotomayor remarked, “Are we suffering from a crisis of legitimacy? I can say to you that we are.”  She added, “That is very, very concerning to all of us.”  She discussed her view of how political groups have taken terminology and discussion from the academic sphere and used it to try to predict how judges would rule. “They have created, I think, in the public perception, a sense that judges are political because politicians tell you how they’re going to rule from their philosophy,” she said. “I do fear that our legitimacy crisis has been created by the political branches, using judges and their appointment and the discussions as political weapons rather than the academic and philosophical underpinnings that were originally intended.”

In this time of deep division in our country, Justice Sotomayor praised her colleagues on the Court for their ability to passionately disagree and yet maintain caring friendships.  “It’s an example I wish more of the country would follow,” she said.  “You can disagree but still be agreeable to each other as human beings.”

Justice Sotomayor also spoke about oral argument and opinion-writing.  She acknowledged that in some cases, she enters oral argument unsure about what the outcome should be, and is influenced by the arguments.  She also said she finds some arguments useful in informing her reasoning as she is writing.  But citing the extensive work of the lower courts and the briefs they receive when grappling with a case she said, “In a good majority of the cases, argument doesn’t change our mind because we’ve heard or read the counter[arguments] before.”

When describing the difference between writing an opinion of the Court and writing a dissenting opinion, Justice Sotomayor pointed to the importance of the authorial voice.  When writing an opinion of the Court, “you’re writing for the voice of the Court and so you have to write with more care and more narrowly to say only as much as necessary to resolve the issue in front of you.” She went on to say, “When you’re a dissenter, however, it’s your own voice.”

“My Court right now is stagnant in its professional experiences,” Justice Sotomayor said of the Court’s lack of breadth in background of practice among the Justices. “I think that’s very, very dangerous,” she added. Citing as examples civil rights, immigration, environmental and criminal defense law, she talked about the importance of lived experiences as the Court makes decisions having an impact on individuals.

“Take work that you find exciting. Do it well,” Justice Sotomayor told students, concluding her remarks. “It’s been a real pleasure to be with you,” she added.

“This was a treat, and we are grateful that Justice Sotomayor was willing to carve out time from a very busy schedule to talk with us,” Brandon said of the event.