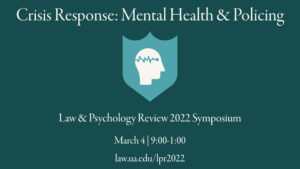 In 2003, Tim continued to work as a Canine Handler and traveled from Huntsville to Birmingham four nights a week to attend the Birmingham School of Law. He became a licensed attorney September 29, 2006 and began his career as a prosecutor with the Madison County District Attorney’s Office in November of 2006.

Dr. Hee Yun Lee is a behavioral health scientist and her major research areas include health disparities, behavior change intervention using RCT, and rural health. Combining mobile health (mHealth) technology and a community-based participatory research approach, she is developing and testing intervention programs to promote positive health behavior change and to increase health and mental health literacy. Dr. Lee’s current research project focuses on development and dissemination of online mental health and substance abuse training, REMIND, for police officers. This project was funded by Substance Abuse and Mental Health Services Administration over three years. Dr. Lee has been working with police and sheriff departments in Tuscaloosa County to develop an 8-hour online training program and trained 155 police officers to date. This research is the first of its kind in training police officers on how to effectively communicate with people with mental health and substance abuse issues. Dr. Lee expects that her training ultimately saves lives resulted from miscommunication between police officers and people with mental health and substance abuse problems. She is also currently conducting other studies that are federally funded including COVID 19 vaccination promotion project in Black Belt areas of Alabama. Her work has been widely published in medical, public health, nursing, and social work journals, and she has been invited to speak at numerous national and international conferences.

Jeremy Blair is the CEO of WellStone, a community mental health center in Huntsville, AL. Mr. Blair earned a BS in Psychology and Master in Marriage and Family Therapy from Harding University and an MBA from the University of North Alabama. He has worked in non-profit behavioral healthcare for the last 22 years serving children, adolescents and adults suffering from mental illness and substance use disorders. Mr. Blair serves on the boards of LifeSouth Community Blood Centers, Partnership for a Drug Free Community, Association of Marital and Family Therapy Regulatory Boards and Happi Health.

Dr. Kois is a clinical and forensic psychologist and Assistant Professor in the Department of Psychology. She is core faculty of the Psychology-Law PhD program. Dr. Kois received her BA in Psychology from James Madison University and MA in Psychology from New York University before obtaining her PhD in Clinical Psychology (Forensic focus) from John Jay College at the City University of New York. She completed her predoctoral internship at the University of North Carolina School of Medicine, which included assessment and therapy rotations at Butner Federal Correctional Complex.

Dr. Kois’s primary areas of research are in evaluation, assessment, and interventions related to competence to stand trial. She is co-founder and co-chair of UA’s Southern Behavioral Health and Law Initiative with psychology-law faculty colleague Dr. Jenni Cox. She also co-founded and co-directions the Alabama Forensic Assessment Research and Evaluation (Alabama FARE) with Dr. Cox, which is a contract with the Alabama Department of Mental Health with the goal of enhancing services for individuals involved in the criminal legal system. She is the primary supervisor for the inpatient evaluation clinic at Taylor Hardin Secure Medical Facility, which is the forensic hospital in Tuscaloosa, AL. She is also Principal Investigator of a financial empowerment randomized controlled trial, specific for individuals with severe mental illness and criminal legal involvement, funded by the Bureau of Justice Assistance.

Representative Neil Rafferty is the state representative for House District 54 in the Alabama House of Representatives. He is a Birmingham native and a Marine Corps veteran. After his term of service in the military, Rafferty used his G.I. Bill benefits to earn degrees from the University of Alabama at Birmingham.

Representative Rafferty chairs the Democratic House Caucus Platform Committee. In the legislature, he sits on the Sunset, Health, Economic Development and Tourism, Transportation, Infrastructure and Utilities Committees. He has been appointed to the Alabama Challenge Veterans Suicide Task Force, the Opioid Overdose, Addiction, and Treatment Council, and the 988 Implementation Study Group. He also serves as the Director of B-CHIP Program at Birmingham AIDS Outreach. His B-CHIP team addresses health disparities through intensive collaboration with community members, partner nonprofits, the Centers for Disease Control (CDC), state and county health departments, and clinics to implement community-coordinated, public health strategies.

James Tucker grew up and attended public schools in Decatur, Alabama.  He earned an undergraduate degree in finance from The University of Alabama in 1982 and his law degree from Emory University in 1986.  He was worked at ADAP since 1997.  Mr. Tucker also has practiced with Florida Rural Legal Services, the ACLU of Alabama, and the Southern Poverty Law Center.  He has litigated class actions in federal and state courts addressing disability, gender, and race discrimination as well as mental health, foster care, education, employment, housing, voting, corrections, and Medicaid issues.  He is a member of the Bar in Alabama, Florida (inactive), and Georgia (inactive).  He has received numerous awards for his disability advocacy work in Alabama​.

Dr. Amy Watson is a professor in the Social Work Department at the University of Wisconsin-Milwaukee. Dr. Watson has worked extensively on issues involving persons with serious mental illnesses that come in contact with the criminal justice system. During the past two decades, her research has focused on police encounters with persons with mental illnesses and the Crisis Intervention Team (CIT) model. She has also conducted research on mental health courts and prison re-entry programs. Her current work is looking at models to reduce/eliminate the role of law enforcement in mental health crisis response.

Dr. Watson has been actively involved in court and law enforcement advisory groups and served on the compliance team for the Department of Justice settlement agreement with the City of Portland (OR)/Portland Police Bureau. Earlier in her career, she worked as a probation officer on a team serving clients with serious mental illnesses and as a forensic social worker/mitigation specialist working on death penalty cases.

Carleigh Sailon is a licensed clinical social worker and licensed addiction counselor with over 7 years of experience in community mental health and program development. Ms. Sailon has held several different positions throughout her career working as a case manager, behavioral health navigator in the Denver Downtown Detention Center and Program Manager of Criminal Justice Services. She spent several years creating and managing alternative response models and programs throughout the criminal justice system. She developed and staffed the STAR van during its initial pilot year and recently transitioned to a new position with Denver 9-1-1 as the STAR Operations Manager to oversee the expansion. Ms. Sailon also teaches as an adjunct professor for the University of Denver’s Graduate School of Social Work. She is originally from Long Island, New York and received her MSW from Stony Brook University.

Jackson Beck is a program associate in Vera’s Redefining Public Safety program. Mr. Beck’s projects focus on improving emergency responses and promoting community-based care for people with unmet behavioral health needs. This work includes researching civilian crisis response programs and partnering with local practitioners and advocates to drive change. Previously, he coordinated trainings, technical assistance engagements, and resource development for a national initiative dedicated to improving police responses to people with mental illnesses and developmental disabilities. Prior to Vera, he assisted the communications team at FAMM (Families Against Mandatory Minimums) in Washington, D.C. and supported advocacy to secure greater resources for individuals in recovery with United Strategies in Saint Paul, Minnesota. He holds a BA in Political Science from Yale University.