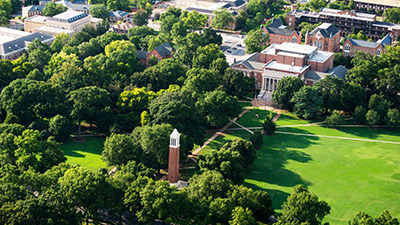 Long a mecca seven Saturdays each fall, Tuscaloosa should be high on your destination list regardless of the time of year or your football affiliations. Visit the areas around campus and you’ll think you are in the best college town in the nation. But spend time in the larger community and you will find an area with global diversity because of both the University and industries like Mercedes-Benz.

The citizens of “T-Town” don’t rest on their laurels—they are continuously pushing their city to new heights. From making sure Downtown is constantly a destination for the best locally-owned-and-operated businesses, restaurants, and entertainment, to attracting economic development investment and encouraging entrepreneurship incubators, Tuscaloosa is a city on the move.

The energy that undergraduate and graduate students bring as they attend this student-centered research university is second-to-none. Students and citizens work together to constantly bring new ideas and inspirational creativity to the table as they strive to make the best even better.

While the fluidity that the University brings to Tuscaloosa means that it is a city that is constantly changing, it is also a community that strives to maintain its authenticity and charm. So you’ll see innovation next to preservation, and respect and inclusivity practiced all around.

Tuscaloosa is located along the Black Warrior River in West Alabama. Conveniently situated along the Interstate 20/59 corridor about an hour drive southwest of Birmingham, Tuscaloosa is within a few hours driving distance of such Southern business and cultural centers as Atlanta, Nashville, Memphis, Mobile, Montgomery, Jackson, Chattanooga, and New Orleans.

With a county population of around 200,000, a city population just shy of 100,000, and a vibrant university community of nearly 40,000, Tuscaloosa is the fifth-largest metropolitan area in the State of Alabama behind Birmingham, Huntsville, Mobile, and Montgomery.