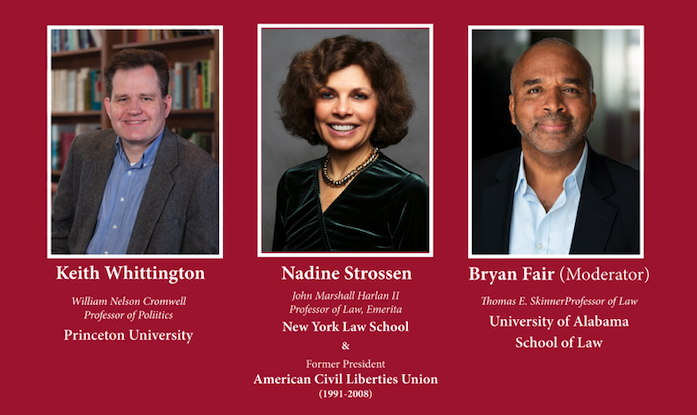 On January 18, 2022, the Alabama Law Program in Constitutional Studies hosted a Free Speech & Civic Discourse panel featuring free speech experts Nadine Strossen—professor at New York Law School and former president of the ACLU, and Keith Whittington—professor of politics at Princeton University. The panel was moderated by Professor Bryan Fair of Alabama Law and is one of many ongoing events supporting the Program’s larger Civic Engagement Initiative—an effort to facilitate meaningful conversations across political and ideological lines among a diverse group of individuals.

Hosted the day after the Martin Luther King, Jr. holiday, Professor Fair began the conversation by asking Professor Strossen, “What lessons about free speech and civic discourse can we learn from Dr. King’s legacy?”

Professor Strossen explained how Martin Luther King, Jr.’s example of responding to hate with non-violence offers a model for all to follow. Referencing a podcast from Washington Post Opinion writer Jonathan Capehart titled Voices: How segregationist George Wallace became a model for racial reconciliation, Professor Strossen shared how a compassionate act from Wallace’s political opponent, Shirely Chisholm, led to Wallace eventually renouncing segregation and the racism he so vehemently supported through much of his life and career.

Professor Whittington dove into how free speech and civic discourse fit particularly into the university environment and discussed some of the differences between government or publics university settings and private environments, including private businesses and universities. He highlighted the challenges universities face in combatting misinformation, while also allowing for true academic freedom and diversity of ideas—advocating for a defense of free speech and thought within academic institutions.

The conversation evolved to discuss, in juxtaposition, the protected rights of private social media companies to restrict speech on their sites and the potentially unconstitutional government pressures put on these businesses to censor speech. The panel also highlighted the importance of protecting human rights and free speech on a local level—which ultimately influences whether or not individual rights, already protected by law, are going to exist.