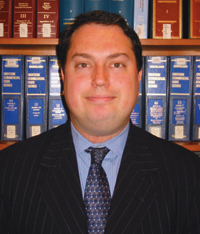 Professor Rosen received his LLM with honors from the University of London, London School of Economics, in 1997, his JD from Yale Law School in 1994, and his BS from Cornell University, School of Industrial and Labor Relations, in 1991 as a Merill Presidential Scholar. He served as a Senior Editor of the Yale Law Journal and an Editor of the Yale Journal of International Law. Upon graduation from Yale, he clerked for the Honorable Edward E. Carnes of the U.S. Court of Appeals for the Eleventh Circuit in Montgomery, Alabama. From 1995 to 1996, he was an associate with the Washington, D.C. firm of Fried, Frank, Harris, Shriver & Jacobson. From 1998 to 2002, he worked in Washington, D.C. for the U.S. Securities and Exchange Commission's Division of Market Regulation, where he achieved the rank of Special Counsel. During his time at the Commission, he provided counsel on matters before the President's Working Group on Financial Markets, aided the restoration of financial markets following the terrorist attacks of September 11, 2001, assisted with legislative drafting, and worked on matters including foreign market access, financial derivatives, market structure, and the regulation of exchanges and over-the-counter markets. While at the SEC, Professor Rosen received the Commission's Law and Policy Award and the Manuel F. Cohen Award from the Securities Law Committee of the Federal Bar Association. Before arriving at the University of Alabama, he served as the first Fellow for the Fordham University School of Law's Center for Corporate, Securities and Financial Law in New York City. He has spoken both in the United States and abroad at events sponsored by such organizations as the Association of American Law Schools, the American Society of International Law, the Law and Society Association, the Southeastern Association of Law Schools, Futures Industry Association, the Small Business Committee of the American Bar Association's Section on Business Law, the Washington Campus, National Regulatory Services, and the United Kingdom's City and Financial Conferences.

Professor Rosen has taught multiple courses at the law school including business organizations, securities regulation, international business transactions, economy in crisis (public policy-making role-playing simulation course), integrated financial regulation (banking, commodities, securities, and insurance law), and conflict of laws. He also holds a courtesy appointment in the Department of Economics, Finance, and Legal Studies at The University of Alabama’s Culverhouse College of Commerce and Business Administration and has been appointed to The University of Alabama Graduate School faculty in connection with his work on PhD dissertation committees. His focus on inter-disciplinary matters also has led to his membership in organizations such as the American Economic Association, American Finance Association, and American Law and Economics Association.  He has advised The Journal of the Legal Profession and was awarded the Edward M. Friend Jr. Award in the year he coached the law school's team to its first appearance in the national final rounds as a super-regional champion in the American Bar Association's National Appellate Advocacy Competition.  He has served as Director of the law school's successful judicial clerkship program, and the law school's students selected him for the 2007-2008 Outstanding Faculty Member Award.

Since joining the legal academy, Professor Rosen continues his public policy work and has advised federal and state government officials.  His expertise is sought in various contexts. For example, he has testified before the Committee on Financial Services of the United States House of Representatives. Professor Rosen also currently serves as a Uniform Law Commissioner.  He was appointed to represent Alabama on the Uniform Law Commission by the Governor for a term of service that runs to April 4, 2023.

Professor Rosen also continues to be involved in legal matters around the globe.  He has advised on business law curricula in Ethiopia and has been selected to teach courses at Australia National University in Canberra, Pusan National University in Korea, and the University of Fribourg in Switzerland.  He has served as Director of the law school's exchange program with the University of Fribourg. In addition, he has served as a Corresponding Editor for the American Society of International Law's International Legal Materials and as Co-Chair of ASIL’s Teaching International Law Interest Group. His work for the American Bar Association has included service to the Section of International Law and Practice.  His interest in development issues also has led to his participation in the World Bank's Law, Justice, and Development Week program and the International Finance Corporation's Doing Business Project.  Moreover, he has served as a member of the Board of Directors of the American Society of Comparative Law and has been selected to be the United States Reporter on Company Law and the Law of Succession for the Congress of the Academy of International Comparative Law in Vienna, Austria.

Company Law and the Law of Succession, 62 American Journal of Comparative Law 387 (IACL 2014)

“Who Killed Katie Couric?” and Other Tales from the Wacky World of Executive Compensation Reform, 76 Fordham Law Review 2907 (2008)

Securities and Exchange Commission, in Encyclopedia of the Supreme Court of the United States (Macmillan 2008)