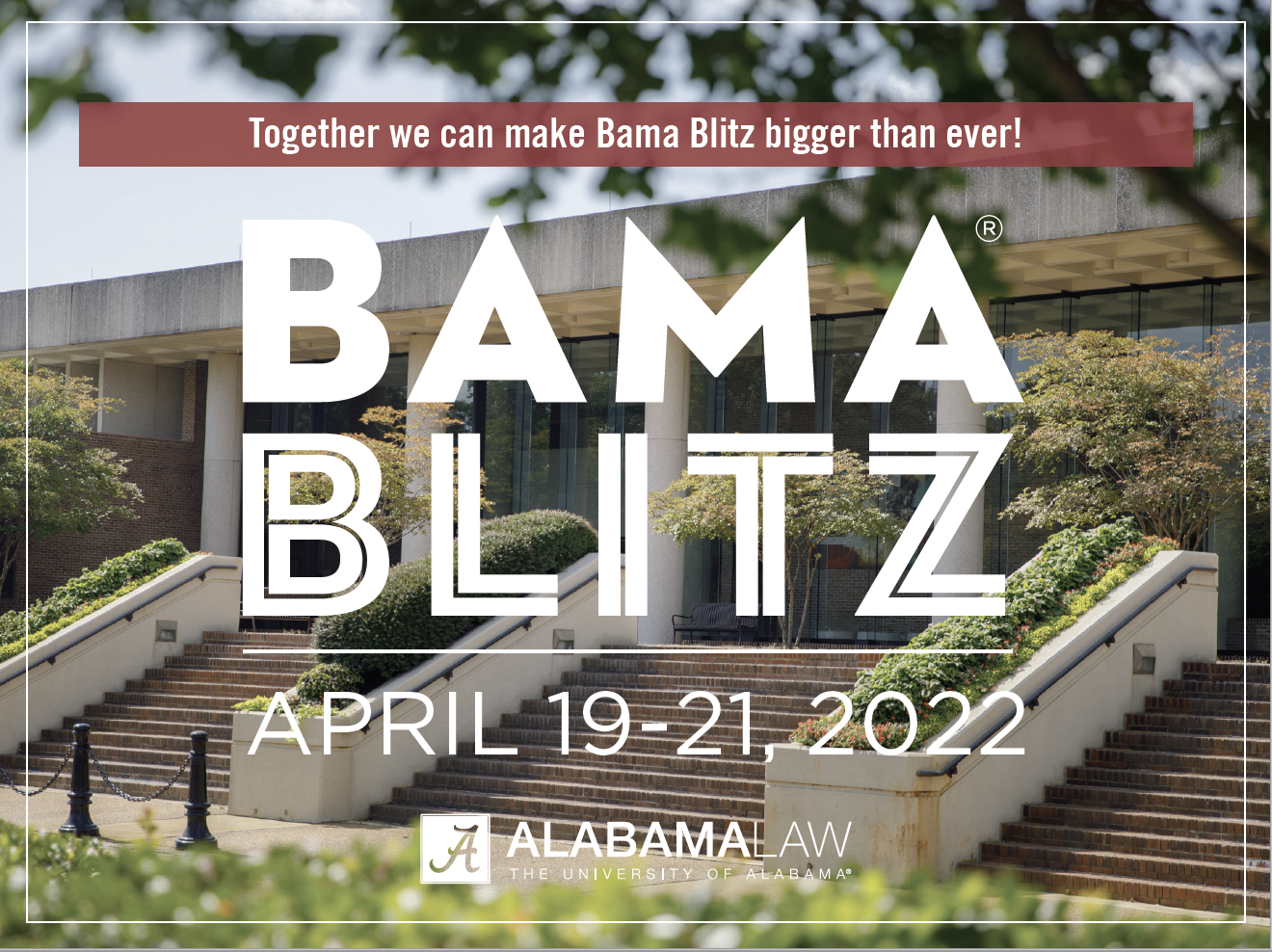 From noon on April 19 to noon on April 21, you can make an immediate and direct impact on our students by participating in The University of Alabama’s annual Bama Blitz days of giving fundraising event. This year, the School of Law invites you to support the 1872 Fund for Student Aid—which provides a financial cushion for Alabama Law students who experience unforeseen financial challenges that can become a stumbling block to their success while in school. Keep an eye out for additional over the coming weeks. For questions about how you can help, contact Candice Robbins, Assistant Dean for Advancement: crobbins@law.ua.edu

In 1907, Luelle Lamar Allen became the first female graduate of the University of Alabama School of Law. In the years since, the percentage of female students at Alabama Law has steadily increased. In fact, the past three incoming 1L classes have each consisted of more women than men – a milestone that would not have been possible without the leadership of female trailblazers who came before. To celebrate this growth, Alabama Law has chosen to highlight three distinguished alumnae from recent decades who’ve left their mark on the legal world in Alabama and beyond. Read more in The Alabama Lawyer.

Alexia B. Borden (‘05) was honored as a member of the 2022 class of Women who Shape the State of Alabama.

Christopher L. Hawkins (‘99) was appointed by the Eleventh Circuit Court to the Bankruptcy Court for the Middle District of Alabama.

Randall Scott Hetrick (‘94) was appointed as the Labor and Employment Practice Team Leader at Adams and Reese LLP in Mobile.

Elizabeth H. Huntley (‘97) was named to the Birmingham Business Journal’s 2022 Who’s Who in Nonprofits list.

Leroy Nix (‘09) was appointed to the Chicago-based Auditorium Theater Board of Directors.

Leanna B. Pittard (‘03) was promoted to Shareholder at Blasingame, Burch, Garrard & Ashley P.C. in Birmingham.

Christopher W. Tomlin (‘94) was named to the Birmingham Business Journal’s 2022 Who’s Who in Nonprofits list.

Steven M. Wyatt (‘96) was promoted to Shareholder at Chamberlain Hrdlicka Attorneys at Law in Atlanta.

Professor Deepa Das Acevedo published Hijab ban: How courts have weaponised the Essential Religious Practices doctrine in Scroll.in, a leading independent newspaper in India. She was also quoted in a BBC article titled Karnataka bandh: Should courts decide if hijab is essential in Islam. In addition, Professor Acevedo was recently awarded the Head Over Heels Leadership Award from the University of Alabama Women’s Basketball team.

Professor John Acevedo presented his current research, Toil and Trouble: The Legal Processes and Evidence during the Salem Witchcraft Trials, at the American Historical Association Annual Meeting in New Orleans.

After 38 ½ years on the Alabama Law Faculty, Professor Bill Andreen retired from full-time teaching on December 21, 2021. He will continue part-time teaching, working with the National Environmental Moot Court Team, and consulting on the Australian Summer School Exchange Program with the Australian National University College of Law. His most recent book chapter on Alabama Water Law (including a long discussion of the water wars among Alabama, Georgia, and Florida) was published in February at “4 Waters and Water Rights” pages AL-1 to AL-52 (Amy Kelley ed., LexisNexis/Matthew Bender 2022). In addition, he spoke on the occasion of the 50th anniversary of the Clean Water Act of 1972 at the Alabama Rivers Alliance Rally for Water, Camp McDowell. His paper addressed the History of the Clean Water Act: Success and Remaining Challenges.

Professor Tara Leigh Grove was interviewed on Bloomberg Television’s Balance of Power, where she previewed the judicial confirmation hearings for Ketanji Brown Jackson. The segment is available at Bloomberg.com (starting at 36:05). During an episode of Georgia State University’s podcast titled Supreme Myths, Professor Grove also talked about statutory and constitutional interpretation, the legitimacy dilemma facing the Supreme Court, and her work on the Supreme Court Reform Commission.

Professors Jean Stefancic and  Richard Delgado were both listed among the top 10 percent of authors, by all-time downloads, on SSRN. The two also delivered a paper titled An Interest-Convergence Explanation of the 2020-2022 Conservative Attack on Critical Race Theory at the 2022 Journal of Law in Society focused on race and education in the United States.

Professor Adam Steinman’s article Beyond Bristol-Myers: Personal Jurisdiction over Class Actions has been accepted for publication in N.Y.U. Law Review.

Professor Fredrick Vars presented as a panelist discussing “Private Property and Gun Regulation” at the Privatizing the Gun Debate Conference hosted by the Duke Center for Firearms Law.