Professor Julie Hill is quoted by Law 360 about the potential effect the U.S. Supreme Court nomination of Judge Amy Coney Barrett may have on the banking industry.

A new article in one of the nation’s most prestigious medical journals suggests that doctors and mental health professionals could use voluntary do-not-sell lists for firearms as a new tool in their suicide prevention toolkit.

Professor Fredrick Vars, the Ira Drayton Pruitt, Sr. Professor of Law, developed the proposal, which would allow those at risk of suicide to voluntarily place their name on a registry, prohibiting gun stores from selling them a firearm.

“Clinicians routinely assess their patients’ risk of suicide, yet they are limited in terms of the practical interventions they can use for patients who are not actively suicidal but who fear they may become suicidal,” Vars wrote in The New England Journal of Medicine.

The article, published in the October issue of the journal, explains how Vars’s proposal has been adopted in Virginia and Washington state. Data show that many people would like to restrict their ability to purchase firearms. A survey of 200 patients receiving psychiatric care in Alabama found that 46 percent said they would register for a do-not-sell list if it were available. In a more general survey, 31 percent of Internet users reported they wanted to participate in a gun registry.

“Clinicians routinely assess their patients’ risk of suicide, yet they are limited in terms of the practical interventions they can use for patients who are not actively suicidal but who fear they may become suicidal,” Vars wrote in The New England Journal of Medicine.

The article, published in the October issue of the journal, explains how Vars’s proposal has been adopted in Virginia and Washington state. Data show many people would like to restrict their ability to purchase firearms. A survey of 200 patients receiving psychiatric care in Alabama found that 46 percent said they would register for a do-not-sell list if it were available. In a more general survey, 31 percent of Internet users reported they wanted to participate in a gun registry.

About 50 percent of all suicides involve a firearm, according to the Centers for Disease Control and Prevention. While doctors may involuntarily hospitalize or file a petition for an extreme risk protection order for a patient who is suicidal, Vars’s proposal addresses the matter before a crisis occurs. He developed it based on his own experience with depression and suicidal thoughts.

“If I had had easy access to a firearm at certain points in my life, I may not be here today,” he said.  “My research shows that the voluntary do-not-sell list appeals to many others and could save many lives.”

The problem of suicide requires a number of solutions, and Vars said his idea is no panacea. Do-not-sell lists, for example, may not affect those who already possess firearms and those who transfer guns privately without a background check in some states. It is, however, a creative, promising, and innovative approach to a public health crisis, he said.

Vars has further developed the voluntary do-not-sell firearm list idea, and other liberty-enhancing gun proposals, with his collaborator, Ian Ayres, a professor at Yale Law School.  Their new book is forthcoming later this month from Harvard University Press: Weapon of Choice, Fighting Gun Violence While Respecting Gun Rights. Quinnipiac Law School is hosting an open symposium about the book on Nov. 13, 2020.

Alabama Law Enrolls Three PLUS Participants in Class of 2023

When the University of Alabama School of Law welcomed the Class of 2023, three of the students had already walked the halls of the building as members of the inaugural class of the Alabama Pre-Law Undergraduate Scholars Program (PLUS).

In 2018, Layne Lightfoot, Roxana Ramos, and Courtney Zotaj, all 1Ls, had learned in the classrooms, met several members of the faculty, and explored the campus when they were still undergraduates at the University of Alabama and Jacksonville State University.

Alabama PLUS allowed Zotaj, of Huntsville, to apply to multiple law schools. She focused her search in the Southeast, with Alabama Law topping the list.

“From our resume and professional skills workshops to panels on career paths in the law, the PLUS Program solidified my decision to apply to law school and gave me the tools I would not have had otherwise to navigate the application process,” she said.

In 2017, the University of Alabama School of Law received a $300,000 grant from the Law School Admission Council to create PLUS. The grant was extended for an additional year due to the pandemic. The program is designed to help prepare students for the law school admission process, to promote success in law school, and to inform students about careers in the legal profession.

The Alabama PLUS program invited 31 undergraduate students to the Law School in the summer of 2018 and for four weeks exposed them to the joys and rigors of legal education. Participants focused on becoming competitive law school applicants, received professional development, and were introduced to different legal practice areas.

“The most enjoyable part of the program was getting the opportunity to work with other students from across the country,” said Lightfoot, an Atlanta native. “I was able to build a strong network of friends to assist me in my journey to law school.”

In just a few years, PLUS has grown into an instrumental pipeline program for Alabama Law. The program gives participants the skills necessary to be competitive law school applicants, said Joshua Porter, Director of Diversity and Inclusion and Assistant Professor of Law in Residence.

“PLUS is an essential program to develop the core competencies necessary for success in the legal profession,” he said. “In order to create a diverse and inclusive legal community, it’s imperative that programs like PLUS continue to thrive.”

The PLUS program also allows students to form relationships with fellow participants, faculty, administrators, staff in the Law School, and members of the legal community, said Daiquiri J. Steele, the former Director of Diversity and Inclusion and Assistant Professor of Law in Residence, who applied for and received the LSAC grant.

“At Alabama Law, the success of the PLUS program was (and still is) a group effort,” she said. “The willingness of the faculty and staff to devote their time and talents to the students is what truly increased the impact of the program.”

During the program’s inaugural year, the participants received an introduction to the law, including legal writing and analysis, and legal ethics. Students also learned valuable lessons about professional conduct in the legal field.

“Outside of the introductory courses we had, I enjoyed the panels and proceedings we were able to observe the most,” said Zotaj. “Not only did these experiences tie together what we were introduced to during our class sessions, but we were able to see how those concepts were applied.”

The days were long. When students weren’t in the classroom, they were visiting Alabama landmarks, including the Birmingham Civil Rights Institute, the U.S. Space and Rocket Center in Huntsville, and the Alabama Supreme Court in Montgomery. The rigorous experience left an indelible mark on participants.

“It gave me the opportunity to network with professors, practicing attorneys, and judicial representatives,” said Ramos, who is from Crossville, Alabama. “It set the foundation for my legal learning.”

The program is open to students who have completed their freshman or sophomore years at four-year colleges and universities, technical colleges, and community colleges. Eligible students must have completed between 30 and 60 credit hours by the start of the PLUS Program and have a minimum grade point average of 2.5 (out of 4.0).

For more information and to apply, visit www.law.ua.edu/PLUS.

Victor Methos, the author of The Hallows, received the 2020 Harper Lee Prize for Legal Fiction during a virtual ceremony at the Library of Congress’s National Book Festival.

Methos and the members of the Selection Committee discussed The Hallows in relation to To Kill a Mockingbird. Dean Mark E. Brandon moderated the discussion.

Ten years ago, to commemorate the 50th anniversary of the publication of To Kill a Mockingbird, and to honor former UA law student and celebrated author Harper Lee, the University of Alabama School of Law created the Harper Lee Prize for Legal Fiction.

Professor Joyce White Vance writes an op-ed for TIME magazine about Justice Ruth Bader Ginsburg and the legacy of her dissent in Shelby County v. Holder.
For more, read “Ruth Bader Ginsburg Lost Her Battle to Save Voting Rights. Here’s How We Can Take Up the Fight and Honor Her Legacy.”

Professor Carroll Weighs in on Charging Violent Protesters with Sedition

Professor Jenny Carroll is quoted in The Wall Street Journal about charging violent protesters with sedition. 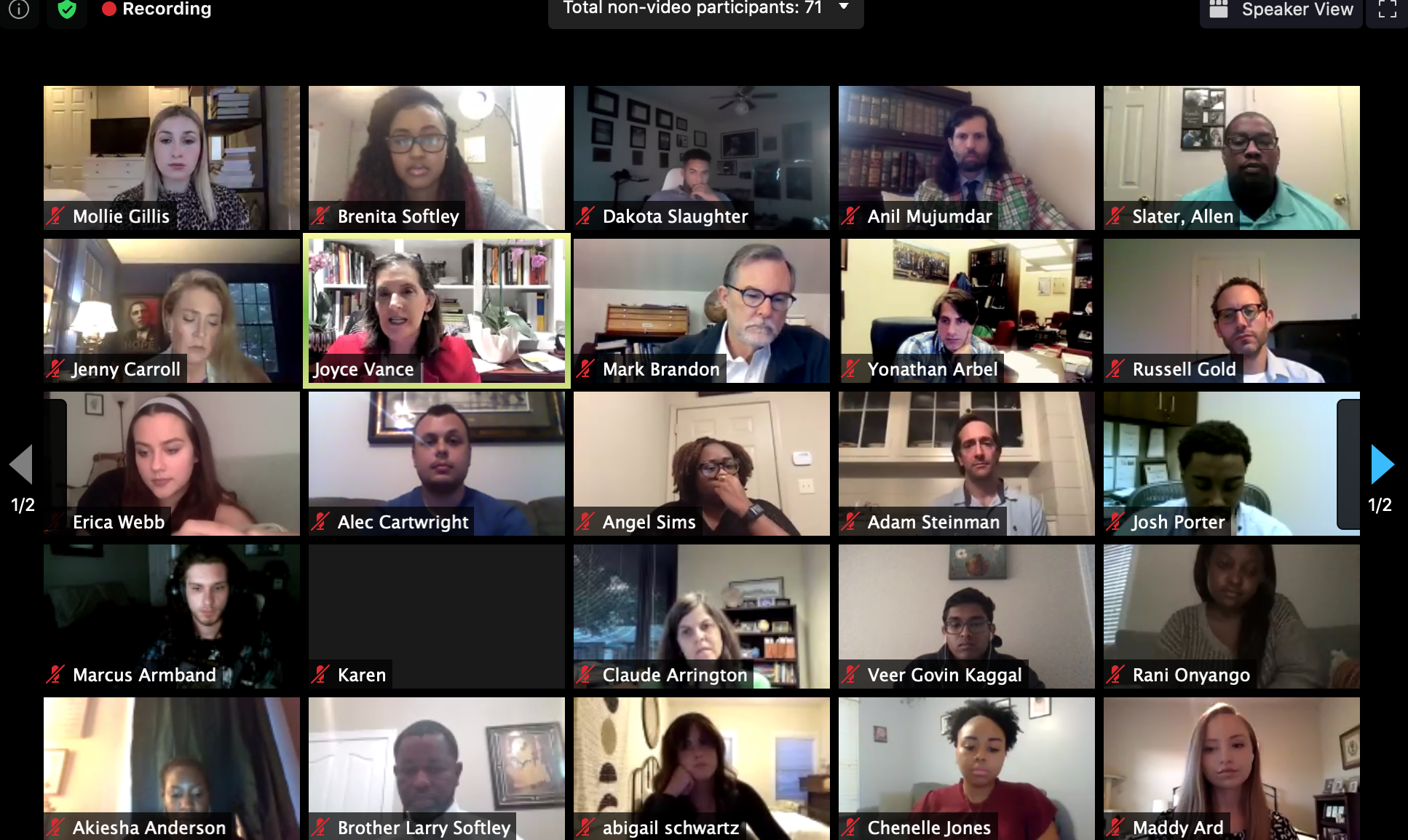 For more than an hour on Wednesday, faculty and students discussed mass incarceration and criminal justice during a town hall meeting.

Early in the conversation, panelists discussed bias in law enforcement, from arrest to sentencing. Professor Carroll noted the overuse of the criminal justice system as a means to promote safety as well as law and order.

“That contributes directly to a system that says: ‘We do need to lock up children who misbehave at school; we do need to lock up folks, who, regardless of the types of offenses they’re committing, we view as contrary to notions of law and order, and safety,’” Carroll said.

Softley recalled a case she studied as a student in Professor Carroll’s Criminal Law course. The case involved Latasha Harlins, a 15-year-old African-American girl accused of stealing a bottle of orange juice and fatally shot by a convenience store owner in 1991. As Softley reviewed the sentencing guidelines, she noted the judge in the case said Soon Ja Du didn’t look like a criminal.

“What does a criminal look like to you? Because growing up, you’re always told that black and brown people are criminals,” she said.

Slater acknowledged that the criminal justice system is biased, but he would prefer to reform it, not abolish it.

“On the one hand, it’s is important to think about prison abolition and to think about how we can do this better,” Slater said, “and on the other hand, we need to introduce some transparency and accountability for the people that are incarcerated now.”